Brian, as the fourth of six generations of kindred restauranteurs, grew up believing it was normal to debone and portion 500 chickens every Wednesday after school. Working in his family’s 1500-seat restaurant, which included an annually awarded Mobil 4 diamond formal dining room, he spent his entire childhood working endless hours with classically trained chefs, ranging from Le Cordon Bleu-trained to self taught masters. He continued his culinary education into adulthood and attended the Culinary Institute of America and received professional instruction in Paris, France. His culinary passion is healthy cuisine incorporating local, fresh, seasonable ingredients from local farms and butchers in his original seasonal recipes.

Brian’s idiosyncratic style of healthy cooking and the ability to understand the nutritional role of food as fuel for the body has led him to many culinary adventures. He is a two-time people’s choice winner of the Virginia CASI sponsored Chili Cook-Offs, and is a published food writer and guest speaker in national and local food circles. He has also studied Molecular Gastronomy in his post-academic career.

In the region, many judgements are based on heritage and legacy. The Feed Bag has the support of a family that has served 6 generations in the food and restaurant business, including a Dean at the Culinary Institute at Johnson and Wales in Rhode Island. If bloodlines are a measuring stick in the area, the Lichorowic band is a paddock of Thoroughbreds. 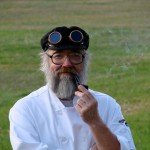 Ken came from a family of the worst cooks on the planet and learned to cook in self defense from the moms and grandmas of friends from a wide variety of ethnic backgrounds. He has competed for a number of years in regional Chili Cook-Offs, is getting better at smoking Barbecue, and is teaching himself charcuterie, just for fun.  He grows and prepares most of his own culinary herbs indoors under lights, roasting and smoking them himself and creating his own spice mixes, seasonings, and rubs.

Want to keep abreast of the latest happenings? Then sign up today!